2019 proved to be a very good year for investors. This is in contrast to the almost constant stories in the media warning of an immanent recession, which would spell doom for the equity markets. It was also a year that saw many, many potentially very negative events overlooked on the way to new market highs. This again shows us very plainly that we have to shut out the excessive noise (to some extent) and focus on the fundamentals. Currently fundamentals are extremely strong, with low unemployment and the economy continuing to confound the “experts”. The U.S. continues to shine as a bright spot in the developed economies of the world.

During 2019 the S&P 500 index rose 29% and the Dow Jones Industrial Average was up 22%. More specifically for the S&P 500, 2019 was the best year since 2013, while the Dow had its finest 12-month period since 2017. In 2019 investors earned very strong returns, but in 2018 stock returns were negative, with the S&P 500 falling over 6%. The dramatic difference between the market’s performance in 2018 versus 2019 tells us again, to focus on fundamentals and invest for the long-term. 2020 could very well be another positive year. According to Barrons, stocks have finished higher two-thirds of the time in years following a +25% or higher gain.

As we have mentioned before, calls for an immanent recession and how equity markets perform are not always correlated. Also of note, financial markets are prone to excess both on the way up and the way down. What this means is, equity markets tend to get “frothy” when moving up past what might be considered “fair value” and on the way down can tend to become very “oversold”. While it is almost impossible to predict market tops and bottoms, it would seem that we are in a place of, at minimum, fair value and headed toward what could be termed an expensive market. But as they say, “the trend is your friend” and 2020 is off to a strong start with equities continuing to climb.

Recession fears? A recession can be viewed and defined differently depending on whom you ask. But generally, a recession is when we have an economic contraction (not just a slowdown) broadly across the economy. The formal definition of a recession is when GDP contracts for two consecutive quarters. The problem of predicting a recession lies in two things. One, we sometimes don’t know that we are in a recession until it has already happened due to the lagging nature of reporting economic figures. Secondly, and likely more important, recessions are like the weather, everyone wants to be right and predict when it will happen.

To make matters worse, economists, who are typically noted for their dreary outlook, are the main group of prognosticators calling for a future economic meltdown. A famous quote that bears repeating here is, “ God created economists to make weather forecasters look good”. This should be taken a step further because economic predictions have been researched for their accuracy and have been shown to be no more accurate that a random guess. A recent study concluded that economists had failed to predict 148 of the past 150 recessions in the developed world! 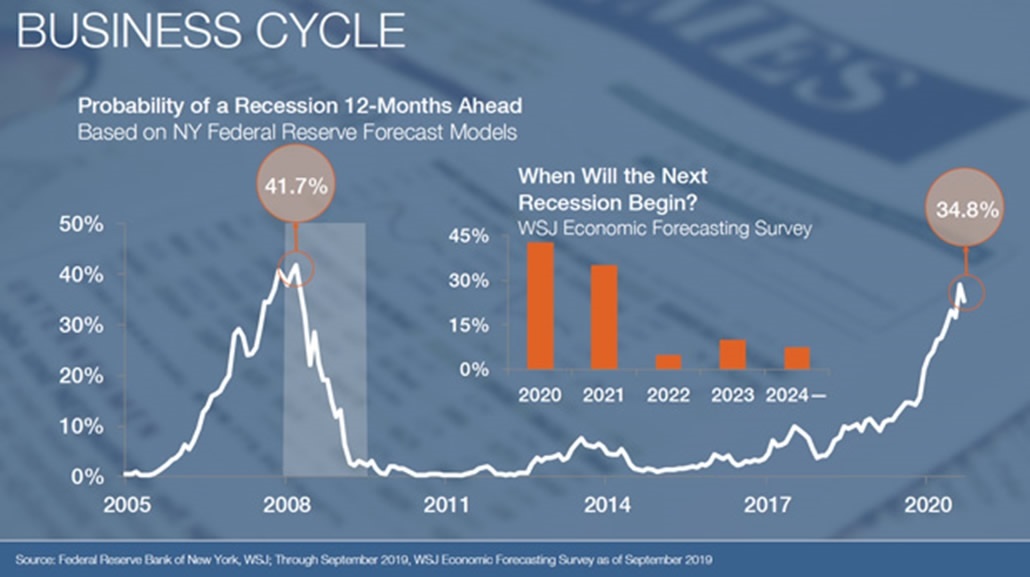 To further nudge economic forecasters on toward their certainty of an economic meltdown is the fact that we are officially in the longest U.S. economic expansion in modern history. Some market prognosticators are using the logic that since this party has been going on for so long…it must be over soon. If we were to use this reasoning we would have had a recession a couple of years ago, which in fact many economists predicted due to the then long duration of economic expansion. “Historically, the best that forecasters have been able to do consistently is recognize that we’re in a recession once we’re in one,” said Tara Sinclair, an economist at George Washington University. “The dream of an early warning system is still a dream that we’re working on.” So, at this point we will not ignore the economists that are calling for a slowdown, we will just take their opinions in with the broader context of an equity market that is fairly valued. 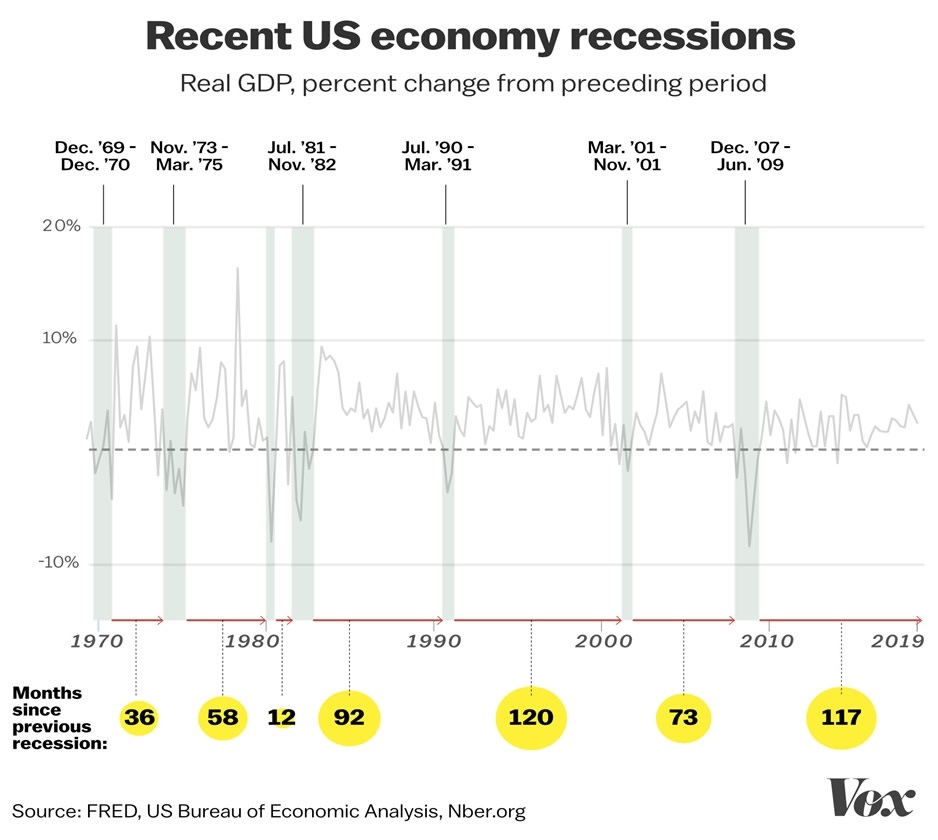 The study of numbers and how they are presented can be an interesting pastime. If we simply focus on 2019, the absolute returns look staggering. But if we combine them with the negative equity returns for 2018, things look much different. The two-year average annual return from the beginning 2018 to the end of 2019 was approximately +10%. Given the past two year’s positive returns on average, predicting an up year for equities in 2020 don’t seem unreasonable. Conventional wisdom at the beginning of 2018 was that a strong economy, coupled with the Tax Reform Act that dramatically reduced tax rates, would catapult corporate profits and the stock market higher. While many of the talking heads were correct about the trajectory of S&P 500 profits, which propelled upwards by 24%, stocks still declined 6% in 2018 (as mentioned earlier). If you fast forward to the start of 2019, after a -20% correction in stock prices at the end of 2018, conventional wisdom stated the economy was heading into a recession, therefore stock prices should decline further. This obviously proved to be radically incorrect.

Although profit growth for 2019 was roughly flat for S&P 500 companies, stock prices unexpectedly skyrocketed. This confounded the experts who, due to trade uncertainty and uncertainty overseas. The moral of the story is profits are very important to the direction of future stock prices. One of the lessons learned over the last two years is that listening to the self-proclaimed professionals, economists, strategists, and talking heads on TV, can be dangerous to your financial health and usually a waste of time.

So where do we go from here is the obvious question. Unemployment is low, The Fed is accommodative, the U.S. is an economic beacon of stability in the world, and we are still growing our economy. Many, many positive factors should continue to support equity prices. Are we in the 7th or 8th inning of our great bull market and economic recovery? Probably. But the key is it’s not over yet. We will still stick to the playbook of trying to buy equities that are reasonably valued with good growth prospects. At the same time we are becoming more cautious and look to take profits on some stocks that have had quite a run. Wishing you all the best in 2020.