Higher for Longer & Hiding in Cash

“As I’ve written many times about the economy and markets, we never know where we’re going, but we ought to know where we are”.

As was the commentary last quarter, interest rates continue to weigh on asset values.  This stretches across everything from real estate, stocks and bonds, crypto (more specifically on that later) and commodities.  When the Federal Reserve initially began to raise rates, the discussion from the financial press seemed to be centered on how soon the Fed would “pivot” (stop rate hikes).  This seemed very premature and now most reasonable market commentators have come to the conclusion that higher rates are here to stay.  Chairman Powell has been clear in his communication with the press about the Fed’s goal of increasing interest rates to bring inflation back down to their target of about 2%.

What might be alarming is that inflation has been officially running at 6%-8% (with many saying in reality it is much higher), peaking at 9.1% in June of 2022.  At first, the inflation spike was described as “transitory” by the Fed in an attempt to not cause panic among investors.  As the Fed later adjusted their narrative and made it clear that their fight against persistent inflation would not be over until they saw a meaningful decline in inflation, did investors begin to realize what might be in store for interest rate levels.  It is our belief that this is why we have seen the worst equity market performance since 2008 for stocks and the worst performance for a 60/40 portfolio (60% stock, 40% bonds) since 1936.  As this seems like a mistake, we have “fact checked” this and yes, because bonds performed so poorly in 2022, the average investor in this type of strategy has seen a decline of nearly 20%.  We have to go back to the Great Depression of ’31 and the Great Crash of ’37 to find a period of greater losses for  60/40 stock and bond portfolios.

The only sectors that broadly performed well in 2022 were energy and pharmaceutical stocks.  The only place to to hide among the big three of stocks, bonds, and cash...has been cash, which is a very unusual occurrence.  As mentioned, bonds have performed poorly with US Treasuries returning a negative 15% for 2022 (the worst one-year return on record).  But, market declines can lead to opportunities as valuations have come down, which leads to higher future expected returns and a higher current yield when cash is deployed into stock and bond portfolios respectively.

There has been a lot of discussion regarding if we are in a recession.  Simply, a recession is defined as GDP contraction for two consecutive quarters, but some are trying to massage this definition depending on certain political leanings.  Regardless, due to COVID-induced stimulus in the trillions of dollars that are now drying up, we likely are in or entering a period of much lower economic growth.  It is important to note that low growth combined with high inflation rates makes the average consumer feel like we are in a recession.  But, what impacts both the wealthy and average consumer is interest rates, which have risen at the fastest rate in recent history.  We have to go back to the 1979 and 1980 period when interest rates rose this far, this fast.  This was when then Fed Chairman Paul Volker broke the back of inflation with extremely high interest rates rising to over 20%.  How high will we go this time? 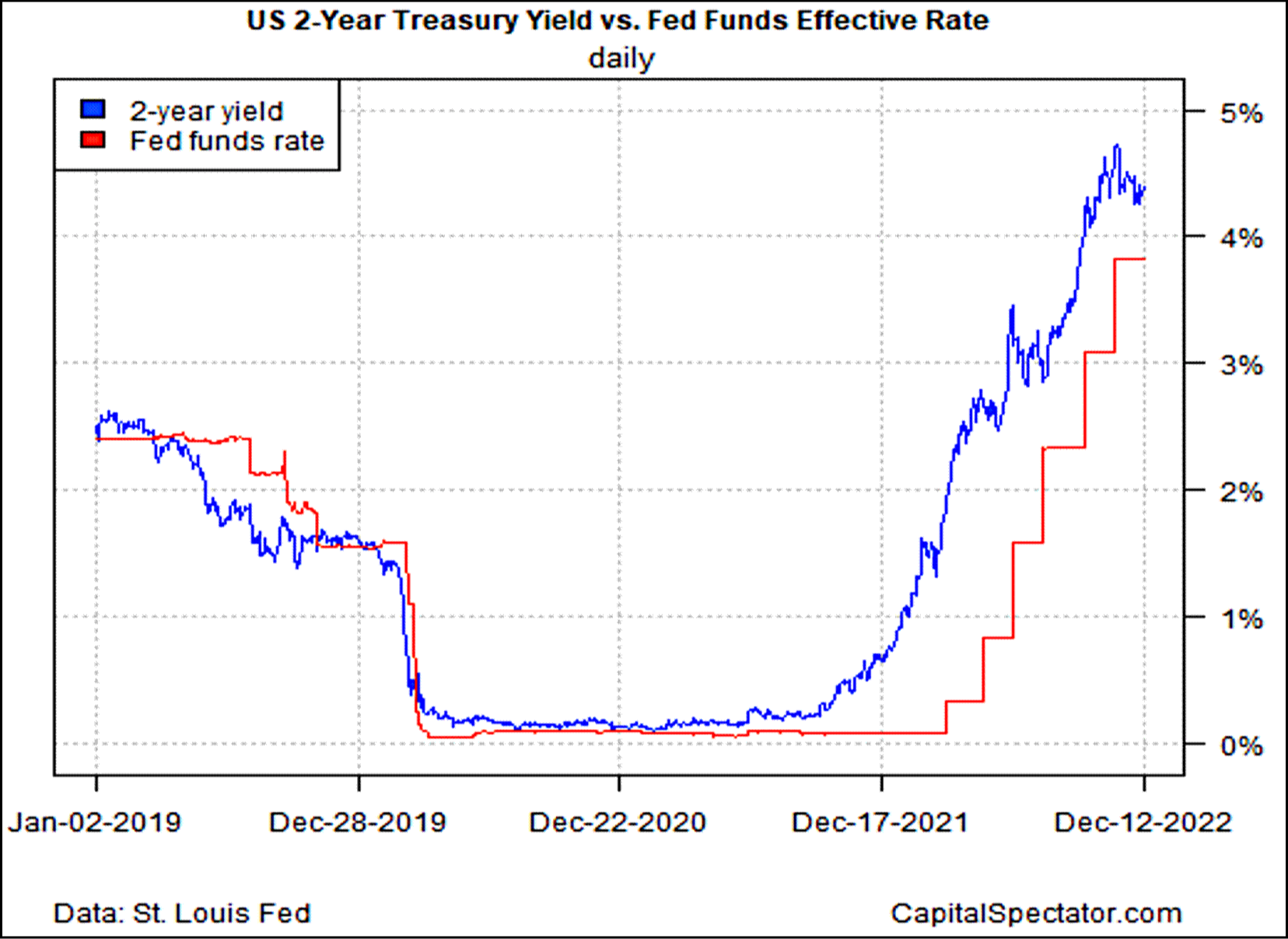 The immediate effects we have seen from higher rates illustrated in the chart above are sharp declines in both equity and bond markets (both substantially down in tandem) in 2022.  Also, a massive shift away from crypto assets and dramatic slowdown in the real estate market has wiped trillions in value from investor portfolios.  Chairman Powell has made it clear that the intended effect of higher rates is to drain liquidity out of the financial markets and cool inflation.  Rate hikes have begun achieving their intended results as we have likely seen “peak inflation” and declines in most asset classes.

The decline of virtually all asset classes, in effect, has reduced the purchasing power of the people who hold these assets and dents consumer confidence.  This is unfortunate, especially if you were heavily exposed to technology stocks, as it may take a long time to recover from the selloff in stocks like Facebook, Tesla, Google, Amazon, etc.  An equally weighted portfolio of Meta (Facebook), Apple, Amazon, Netflix, and Google was down 46% in 2022.  While the S&P’s performance was rough, the NASDAQ composite was down 32%.  As mentioned last quarter, high growth companies are very sensitive to higher rates.  We witnessed this with the tech market selloff and where “old school” value stocks have fared much better in this rising rate environment.

What does this “re-rating” (i.e., interest rates substantially higher) mean for the economy and asset values?  There is much debate over interest rate’s impact, with one camp now clearly losing the “low rates don’t really matter” argument.  Across the technology sector we are beginning to see large technology firms announce substantial job cuts.  Many argue that these are just excess employees who were hired in a post-COVID-induced frenzy and we are just getting back to normal.  But, this seems like a faulty argument with what we are discussing right now…meaning where are we headed with the headwinds of decreases in assets’ values, a Fed hell bent on cooling the job market coupled with higher interest rates? 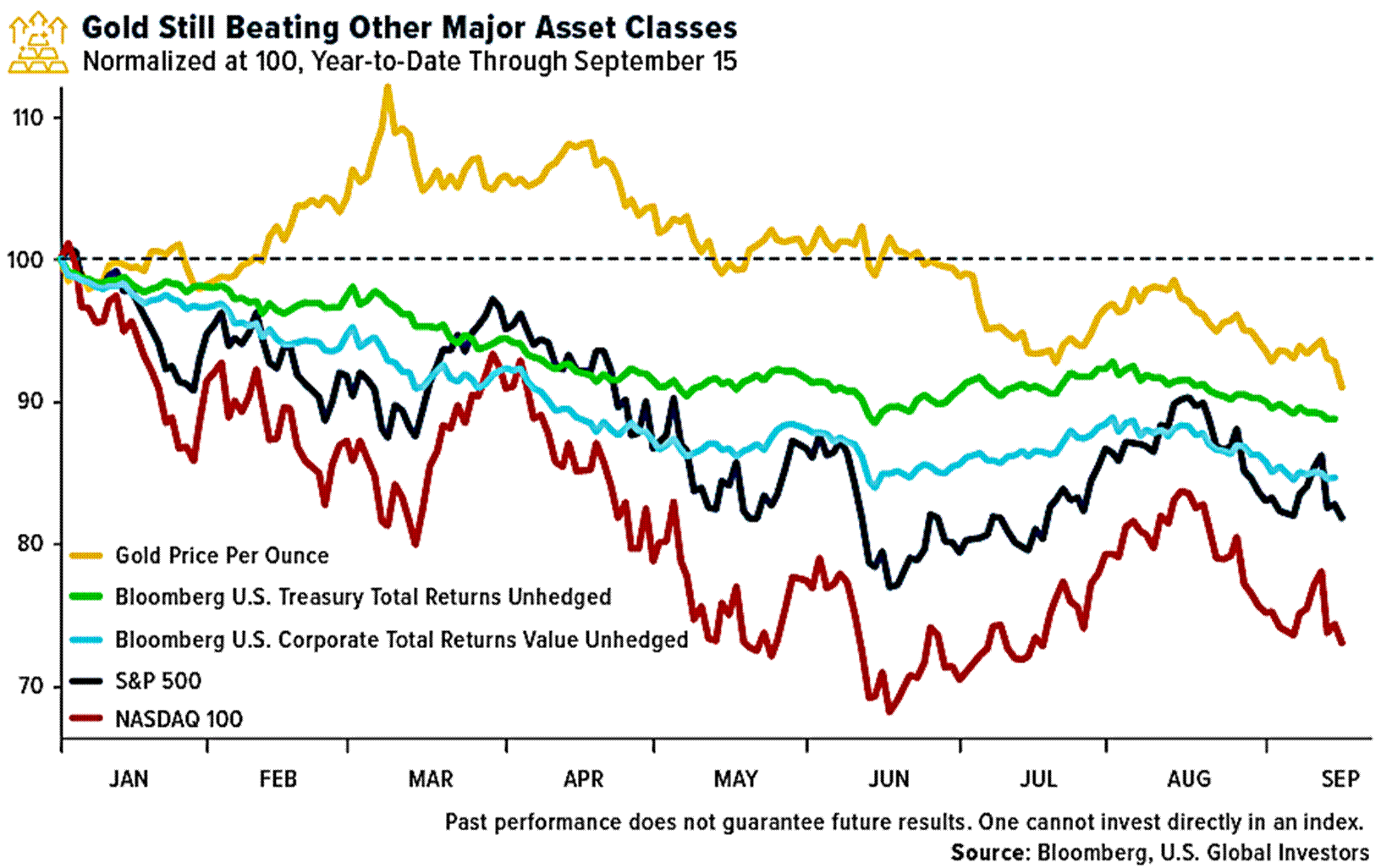 It seems quite impossible that we aren’t in for an economic slowdown, which we may have already started.  But, importantly, what does this mean for investable assets like stocks, bonds, and some real estate assets like REITs (real estate investment trusts)?  It just may be that much of these headwinds are already priced into financial markets (the exception being many tech stocks) with stocks trading at attractive valuations.  As the market is a forward-discounting mechanism, we believe (barring the development of additional negative events) many assets have become attractively priced and we will be adding positions to client portfolios in the coming months.

While the COVID-induced low interest rate environment may be over, we still remain cautiously optimistic about returns from carefully picked stocks and bonds.  The average technology stock is down 30-40% on the NASDAQ, but as mentioned before even with this decline many tech names are still trading at high valuations.  After the tech bubble of 2000, many, many stocks took a decade or more to recover.  So, a recent selloff in some names doesn’t necessarily mean they are now a “bargain”, it just means that their valuations have fallen back to what might be deemed reasonable.  One asset class where a fall in value definitely doesn’t mean it is now cheap is crypto assets. 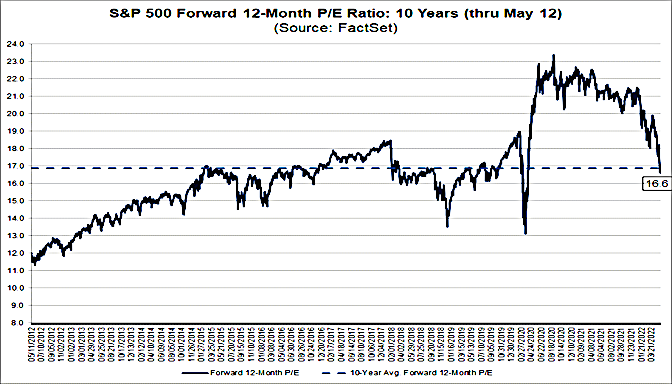 Defining “crypto” is like saying you just purchased a car or a house.  A car could be anything from a Honda Civic to a Lamborghini or a house could be a shack or a mini-mansion.  Full disclosure: this analogy may be doing cars a disservice as they have intrinsic utility value to get us from point A to point B and you know that it has an engine, you can touch it and can be easily sold.  Most crypto assets lack many of these characteristics and even worse, were touted as a reasonable alternative to the US Dollar by many in the financial press.  This bears repeating, Wall Street will manufacture anything that they think they can sell.  The surprise and shock now being expressed in the media after the collapse of FTX is sadly self-serving to many on Wall Street and the financial press of which it is intertwined.

The FTX/crypto collapse is far from the first crypto firm to fold in 2022, but it just may be the most spectacular and widely followed in the media.  Many have said, “Oh, but blockchain will change many industries”.  While this may be true, it doesn’t then necessarily mean companies operating in this space are a good investment.  Crypto assets and the various associated coins have been marketed to the general public as some form of “safe” asset class, when in reality they are anything but.  Bitcoin, the largest digital asset and probably the most widely followed fell approximately 60% in 2022.  Other revolutions in the financial transaction industry have taken place in the past like credit cards, ATMs, wire transfers, etc. but it seems like the survivors and beneficiaries have primarily been big banks.

Bloomberg estimated that over one trillion dollars had been lost on crypto assets as of January 22nd, 2022.  Now, after a parade of spectacular crypto implosions throughout the year, it’s estimated that over two trillion had been lost on digital assets by the close of 2022.  While this industry is not “dead” it certainly is looking very sickly.  Likely, we will see financial regulators come into this space and a more mature digital asset/blockchain market will continue to develop.  It is our guess that while blockchain and associated technology will be here to stay, the wild wild west crypto market is gone.  After most bubbles and manias, we typically enter a period where profitability matters and investors will be much more conscious about the safety of their assets.

As for the outlook, this quarter’s newsletter title says a lot.  Higher for longer means our view is interest rates will remain higher for longer (barring another breakout of an unknown pandemic or war) than currently being jawboned in the financial press.  This may mean that real estate investors still have some pain to endure and we may be entering or are already in a mild recession.  But importantly, where will we go from here on the investment front?  We will begin to deploy cash in high quality defensive type equities with low valuations and bonds that are shorter dated.  While impossible to predict, it feels like the equity market is building a bottom in higher quality stocks (again, many tech names still have a way to fall) and much of the potential economic slowdown may be priced into financial markets.