“It all comes down to interest rates.  As an investor, all you’re doing is putting up a lump-sum payment (your investment capital) for a future cash flow.”

As mentioned in last quarter’s newsletter, interest rates continue to increase significantly.  While some might add that rates are still at historically low levels, it is our opinion what’s impacting financial markets is the delta, or rate of change of rates, from virtually zero to where we are today.  All things being equal, when rates rise, the present value (PV) of future cash flows is decreased and frequently the value of assets that might produce said cash flows also decline.  Not to become overly “mathy,” but if we can think in terms of this higher interest rate context, it will likely help us understand the current state of the stock market.  Clearly, quickly rising rates from the Federal Reserve have been bad for both stock and bond markets this year.

From here the big question is, “will higher rates cause a recession, or just slow the economy and inflation to a rate that is acceptable to the Fed?”  The jury is definitely still out on this question.  We can also take higher interest rate conditions and apply it to other asset classes; one of the most common ones would be housing prices.  It appears that we are starting to see a material slowing of price appreciation and in many markets home sellers are reducing their listing prices.  Granted this is from an elevated level, but the once frothy housing market is definitely cooling.  This cooling effect will likely begin to be felt in the broader economy, quite possibly in labor markets.

We are beginning to hear that some companies are either delaying potential hiring or in some cases, plans for layoffs are being announced.  While the effects of COVID are almost behind us, we expect that a slowdown in the economy will begin to become the common talking point.  Higher interest rates and commodity prices (commodities in recent months have substantially declined but are still elevated versus a year ago) will likely be the blamed for the slowdown.  The negative factors mentioned above, net-net, will act as a tap on the brakes to the economy in the coming months.  But again, the degree of how much economic activity slows will be the big question.

While the economy in the US and most parts of the world has been running hot; inflation and the Federal Reserve’s desire to “rein it in” will continue to be the hot topic.  As discussed in last quarter’s newsletter, inflation has been building for many, many months before the invasion of Ukraine.  Unfortunately, policy makers (read the Fed and many others in Washington) now have a scapegoat in Russia to some degree and have cover to now significantly raise interest rates, without fear of the following blowback from their decisions.  Specifically, the Fed and other central bankers have embarked on a regime to reign in inflation through radically raising interest rates.  This likely will have a big impact on housing, equity markets, and many other asset classes.

The housing market has been on a tear for many years.  Rapid home price appreciation during covid was very much unexpected.  As the panic over covid became widespread in early 2021, one would have expected a pullback in housing prices.  But, for various reasons (some say excessive stimulus, while some point to interest rates that were cut to zero) home prices have skyrocketed.  A recent study by the Brookings Institution on the Fed’s response to covid lays out some recent interest rate history and is summed up by the following two bullet points:

  Federal funds rate: The Fed cut its target for the federal funds rate, the rate banks pay to borrow from each other overnight, by a total of 1.5 percentage points at its meetings on March 3 and March 15, 2020. These cuts lowered the funds rate to a range of 0% to 0.25%. The federal funds rate is a benchmark for other short-term rates, and also affects longer-term rates, so this move was aimed at supporting spending by lowering the cost of borrowing for households and businesses.

  Forward guidance: Using a tool honed during the Great Recession of 2007-09, the Fed offered forward guidance on the future path of interest rates. Initially, it said that it would keep rates near zero “until it is confident that the economy has weathered recent events and is on track to achieve its maximum employment and price stability goals.” In September 2020, reflecting the Fed’s new monetary policy framework, it strengthened that guidance, saying that rates would remain low “until labor market conditions have reached levels consistent with the Committee’s assessments of maximum employment and inflation has risen to 2 percent and is on track to moderately exceed 2 percent for some time.” By the end of 2021, inflation was well above the Fed’s 2% target and labor markets were nearing the Fed’s “maximum employment” target. At its December 2021 meeting, the Fed’s policy-making committee, the Federal Open Market Committee (FOMC), signaled that most of its members expected to raise interest rates in three one-quarter percentage point moves in 2022.

From the two points mentioned above, we can deduce many things about the Fed and interest rates.  The Fed pushed rates down to zero to battle negative economic impacts from covid with the intention of later raising them once inflation was well above their 2% target.  But their previous forward guidance was very wrong in that they expected to only have to raise rates in one-quarter percentage point increments, for a total of three-fourths of a point in 2022.  Currently, we all know that this projection was so wrong, that it seems almost impossible that the Fed even makes predictions in the first place.

The Fed would have raised rates only .75% to date (per their past statements), when in reality they have raised rates five times this year and the Fed Funds Rate now stands at 3-3.25%.  In a recent press conference, the Fed’s Chairman Powell now admits that he doesn’t know if the rapid rise in interest rates will create a recession.  While this is true, the odds of one happening due to the Fed’s actions just keep increasing with each rate hike.  We have often commented on interest rates as the “cost” of money, and money keeps getting more and more expensive. 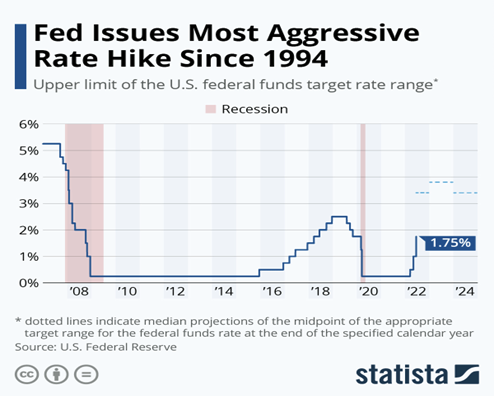 It seems obvious that the most certain victim of higher rates will be housing prices.  While many homes are now bought with cash, a large percentage of people buying homes still rely on mortgage debt to complete the purchase.  As interest rates rise, the associated mortgage payment on a new home purchase also rises.  To believe interest rates that have moved substantially higher will not have a negative effect on home prices seems quite impossible.  We can see from the chart below that the average monthly mortgage payment has increased dramatically in the last six months.  While we don’t foresee a housing market “crash,” a correction is already underway. 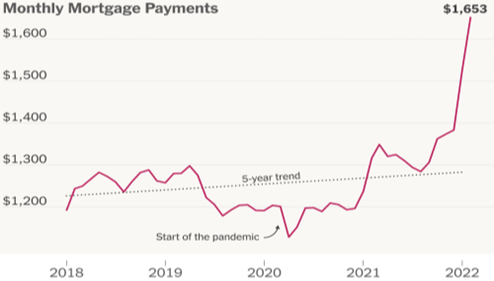 What some have called the great housing bubble of 2008-2009, which was associated with the financial crisis, is not likely to be repeated in past severity for many reasons.  The availability of no doc loans and low lending standards with minimal down payments are a thing of the past.  Banks are well capitalized and due to strong borrowers with large equity positions in their homes, the prospect of mass-foreclosures happening anytime soon is pretty low.  But again, as rates rise, real assets like real estate typically adjust down in value.

In an effort to try and see where we are going, it’s very reasonable to try and understand where we have been.  In short, massive fiscal stimulus and abnormally low interest rates in response to covid created asset inflation (stock and housing markets spiked), which has been transmitted throughout our economy.  Tight supply chains due to covid and a myriad of issues have put further upward pressure on prices.  The crowning blow was Putin invading the Ukraine (we will stress that this is a very minor factor in the overall scheme of things here in the US), this is a real issue for Europe due to heat and electricity prices that are now astronomical in the Eurozone.  This could be called a perfect storm, where multiple factors collide to produce negative unintended consequences across Europe.  It should be noted that it was the US that pushed for, and Germany agreed, to boycott Russian gas supplies that are now threatening to cripple Europe.  But as markets are forward-looking, could it be that we have seen the worst of the selloff in financial markets?

Statistically, if we have a time horizon of a year or more, putting money to work after a correction of 20% should produce positive returns for investors.  But currently, additional negative factors are keeping us on the sidelines.  The prospect of further rate-hikes from the Fed and the prospect of political conflicts overseas means that we have raised client cash levels across all of our portfolios.  Unfortunately, in this market decline there has been nowhere safe to hide except cash.

Many will argue that sitting in cash only means that the cash that you do have is shrinking at the rate of inflation.  But, this is sort of a false argument.  Of your investable assets there are really only three choices: cash, stocks, and bonds.  Stocks and bonds have had their worst year in many decades.  So, in effect your cash (or dry powder that’s sitting on the sidelines) becomes more valuable as you are able to buy more assets at a later date after their price has become cheaper.  This would be analogous to buying another home or vacation house after a large price correction (you are able to now buy that million-dollar house for 750k), which seems like a real possibility with what’s happening in the real estate market.  Stand-by for bargain hunting in many asset classes.