“At the end of the day, it’s not a normal condition to have interest rates at zero.”
--Lloyd Blankfein, Goldman Sachs CEO

Interest rates significantly increased last quarter, which has reverberated into both the bond and equity markets.  The Fed has taken an extremely aggressive stance with quickly raising interest rates in an effort to combat stubbornly high inflation.  In blunt terms, stocks had their worst first-half of the year in over 40 years.  In the first half of 1970, the S&P 500 dropped 21%.  In the same period of 2022, we witnessed a 20.6% decline.  What has made this decline even tougher was the bond market’s performance.  Normally, during stock downturns, bonds have flat to positive returns.  This year bonds have turned in a solidly negative return, compounding this tough investment climate.

From our newsletter last quarter this passage bears repeating, “The Fed, with all their glory of pretending to be able to control inflation, may actually be unable to push inflation back down to where they would like it simply by ‘raising interest rates.’  Too many external factors that have absolutely nothing to do with interest rates, like the war in Ukraine, phasing out of nuclear power in Germany, supply shocks from China, a persistently tight labor market in the US due to folks retiring or choosing not to work, broad-based commodity inflation, four trillion dollars in covid-related stimulus shoved out into the economy, etc. have come into play.”  Fast-forward from the first half of 2022, not much has changed, except rates are much higher.  But inflation has actually accelerated; making the Fed’s stated goal of inflation at “about 2%” seem like an impossible target given current conditions.

Clearly we’re in an environment that we haven’t seen in many decades.  The last time inflation was this high was roughly 40 years ago.  The big question going forward is:  How far and how much pain is the Fed willing to inflict on the economy to tame inflation?  Many are theorizing that we have seen “peak inflation” and prices will self-correct through market economics.  The latter half of 2022 may tell us that we’re entering a period of stagflation (a period characterized by slow or negative economic growth and at the same time accompanied by rising prices) that may last for many years.

Currently, in general, the economy is very healthy (how long this lasts remains to be seen) with unemployment low, consumer spending still at good levels, and healthy household balance sheets.  One of the most common measures of economic health is the employment rate.  We have seen employers continue to hire back post-covid to such an extent that many are stating we are at “full employment.”  Only recently have we heard of employers slow the rate of new hiring.  But regardless, the number of unfilled jobs remains at historic highs.  Low unemployment, barring the development of rampant inflation, with a high number of unfilled job openings are a very good feature. 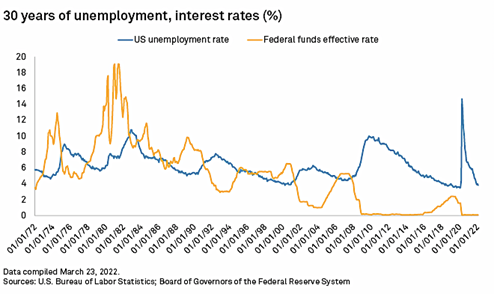 As mentioned above, the big issue is inflation.  But, as we read more into what is happening with inflation, this is not just a US problem, or even only in greater North America.  Inflation is skyrocketing across the globe.  So, again as mentioned previously, the Fed raising rates (while potentially necessary) may not have the intended consequence of only reducing prices.  To accomplish this the Fed has to create a climate of “demand destruction.”  This doesn’t just sound bad, it's a scenario where the Fed raises rates to such a point that businesses stop hiring (or may even begin to cut jobs), companies delay or cancel capital projects, and investors also delay or suspend potential investments due to interest rates (the cost of capital) that make projects unprofitable or too risky to undertake.

While the Fed’s intention may be to engineer a “soft landing” or just to generally cool the economy, the certainty of this happening is definitely tenuous at best.  In the end, the Fed’s actions may precipitate reduced employment, employee’s salaries that are reduced or stagnant, and ultimately its impact will cause consumer demand to become soft.  Reduced demand, (read: a weak consumer) in the end ultimately will bring down or slow prices.  It seems that “engineering” this scenario is like using a steak knife to remove a splinter in your hand.  But, interest rates are the primary monetary policy tool of the Fed.  Their bond purchases or sales, is a secondary (and little understood) mechanism for them to tame inflation. 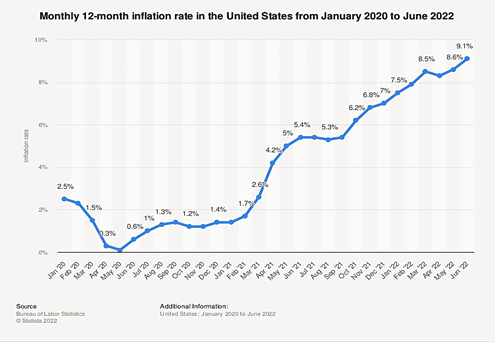 The United States is not alone in suffering from massive inflation.  The United Kingdom recently reported inflation rates at 40-year highs.  The Eurozone inflation rate recently accelerated to 8.6% in June of 2022, the year prior inflation was running at 2.2% per year.  The actual cause of rampant inflation in the world’s developed economies (yes, they all are experiencing massive inflation) unfortunately varies greatly depending on one’s political views.  Virtually all independent economists agree that massive fiscal stimulus related to the pandemic has set the stage for the inflation that we’re experiencing.  Simply put, if you have a set amount of goods and services and throw $10,000 into a room full of people, what they will now be willing to pay for these goods and services will increase.  This is common logic, but unfortunately it has become politicized.  Regardless of political leanings, we can all agree that we are suffering from inflation, but the issue will be how to tame it and what collateral damage may ensue. 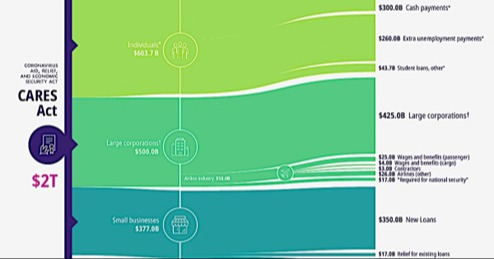 There were three rounds of explicit stimulus programs, each one bigger than the last.  The final tally of money pushed out into the economy is in the trillions of dollars.  To say that this is not inflationary is disingenuous, at best.  Plus, the various bond-buying programs (QE, or quantitative easing) by the Fed provided another stimulus shot to the financial system.  Now, this “dash for cash” was warranted when the pandemic initially broke out and many businesses closed.  But, the last and largest stimulus program is largely being cited as unnecessary.  But again, this now is as they say “history” and where we go from here with a Fed that is both raising rates and starting QT (quantitative tightening) coupled with Federal covid-relief programs that are largely over, will be interesting to watch in the coming months.

But, within this context some attention should be paid to the Fed and their flip-flopping on interest rates.  This alone should discourage us from placing too much faith in the Fed’s ability to predict the future or control our economy (other than throwing an anchor overboard) by raising rates.  In 2021, the Fed called inflation “transitory” trying to explain away a sudden spike in inflation.  At that time they stated they would not raise interest rates until at least 2023.  It cannot be overstated that the Fed has become politicized, and politicians love low interest rates.  Now, as we entered 2022 and with inflation accelerating the Fed has been forced to course-correct and raise rates an almost unprecedented amount as they are behind the curve and chasing inflation.  In June the Fed raised rates by 75 basis points (or .75 percent), the largest increase in over 25 years.  Now, many well-respected market observers are stating that due to Fed inaction, and now overreaction (witness a 75 basis point hike) we are setting up for a US recession or stagflation.  Either-way, neither is a good scenario for the average working American.  Hopefully, as careful investors we can use this to our advantage.

Policy mistakes, either early or late, have consequences.  The dramatic and largely unexpected rapid rise in interest rates has taken its toll on the equity markets.  The old adage “the market takes the escalator up and the elevator down” happened in the first half of 2022.  But, the market also overshoots and swings to long periods of unfounded optimism and shorter periods of extremely negative sentiment.  The recent rise in interest rates has proved to be a bloodbath for many technology investors who thought valuations didn’t matter and rates would stay low forever.  This is almost exactly what happened during the tech bubble in the late 1990, which “officially” burst in 2000.  Many of those early tech companies either went bankrupt, were acquired at a fraction of their previous valuations, or took decades to grow into their newly reduced prices.  Likely we will witness this again, 20-plus years later and it may later be called Tech Bubble Part II. 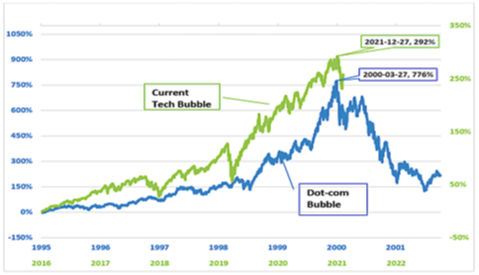 A few months ago, tech valuations were stratospheric and Wall Street firms were justifying stock prices based on financial projections 10 or 20 years into the future.  These companies, while considered good “ideas” may not be good stocks to own…ever.  This is true for many crypto currencies, SPACs, and other speculative investments.  A smart investor once said, “Wall Street will manufacture whatever it can sell,” and Wall Street has sold a lot of crypto and SPACs in the last few years.

But, with any tough period comes opportunity.  This is evidenced by the covid-related stock market selloff we experienced in early 2020 (yes, it seems like an eternity ago).  This provided an entry point to buy stocks for 30% less or more in many cases, than where they traded just a few months prior.  It should be noted that the covid-related selloff also witnessed a brief period when oil traded for less than zero.  How impossible this may seem, with oil now around $100 per barrel.  It should also be noted that oil stocks saw some of the largest declines and subsequently largest gains in the post-pandemic recovery.

With rates likely to continue to rise due to the Fed’s inflation fight, we remain cautious but are optimistic that the current climate will provide a great entry point to buy stocks.  Valuations for very good companies have only become more attractive.  This doesn’t mean buying a tech company that used to trade at 300 times earnings and has now come down to 50 times.  As mentioned above, it may take years for these companies to “grow” into their still lofty valuations.  We have never been a fan of chasing overvalued companies, regardless of persistent Wall Street salesmanship.  In contrast, there are many solid companies producing established goods and services that are currently trading at extremely low valuations.

The economy and the Fed will reach a pain point and stop raising rates.  Corporate America will virtually always continue to be profitable to varying degrees across economic cycles.  As the market remained choppy last quarter we raised cash across all client accounts.  As the first half of this year has been an outlier of tough performance for equity markets, historically this has been a time to get positioned to buy stocks, plain and simple.  We are patiently watching the market and the Fed for when to deploy capital as we expect most of the bad news from increasing interest rates is largely priced into the equity market.