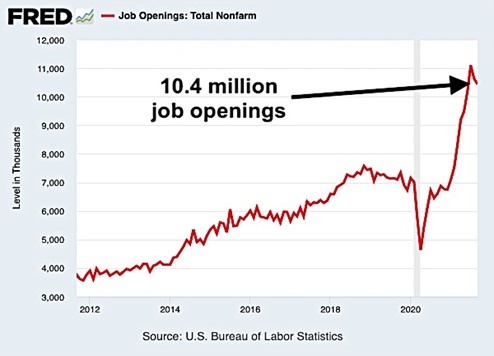 The Road Back to 'Normal'

“Nobody goes there anymore, it’s too crowded”

This quarterly’s title, The Road Back to "Normal” refers to both our journey through COVID, which has drastically impacted all of our lives, and the financial market upheaval that we experienced starting in early 2020 which has continued to a much lesser degree through 2021 due to evolving COVID variants, lockdowns, and government intervention.  While we are certainly not through all of these events, we can see light at the end of the tunnel.  Reflecting back on when COVID was discovered and then widely covered in the media along with the ensuing panic, we have moved far past the fear of the unknown to the expectation of when COVID will effectively end.

Clearly our economy is “running hot” as evidenced by decades-high inflation rates (regardless of how much blame is attempted to be attributed to supply chain issues) and a record number of unfilled job openings in the United States.  Housing prices are hitting records and seem unsustainable, equity markets are hitting all-time highs, and ordinary goods like tires for your car are in short supply.  But if we listen to the media, we are still in the grips of an economic crisis induced by COVID.   Our view is that while some things have and will forever change from COVID, much will remain the same.  A recent trip to the local mall shows that parking lots are full, and people are out spending money, in addition to the huge growth we have seen in online sales.

COVID has also increased awareness of an ever-present and growing wealth gap in this country.  The existing wealth gap problem had been widely discussed pre-COVID, but massive government spending programs have actually exacerbated this divide.  While stimulus measures may have had good intentions, at the end of the day they further inflate asset prices and subsequently stoke broad-based inflation (which hurts lower income people far more than the rich).  As we exit the COVID era, the exercise for 2022 will be navigating inflation, flattening consumer spending, potentially higher interest rates and associated government stimulus programs.

With the economy clearly running hotter than virtually anyone had predicted, where does this leave us?  Regarding a hot economy, we must first stress that equity markets and the economy are not always directly correlated.  Financial conditions (i.e., are they accommodative or restrictive) typically have a larger impact on the direction of financial markets (more on this later).  Regardless of current financial market conditions one thing that we cannot ignore is the unemployment rate.   Unemployment has both a very strong psychological effect on consumers at-large and directly impacts individuals through available disposable income (which, is cycled directly back through the economy).  The unemployment rate is basically back to pre-pandemic lows, but in our opinion the bigger statistic to note is the number of unfilled job openings. 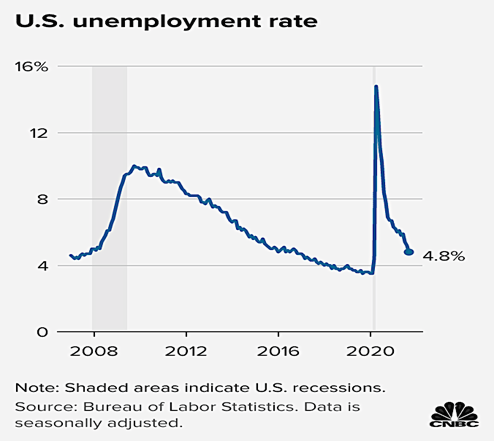 Viewing the chart on the previous page we can see the very sharp, COVID-induced, uptick in the U.S. Unemployment rate, followed by a rapid decline.  In general, we are at what most economists would consider “full employment,” with many in the business world communicating that filling job vacancies is very difficult or near impossible.  This leads us back to the number of unfilled job openings, and we would note that this number is much more indicative of the economy’s health vs. just the unemployment rate.  From the chart below we can clearly see the massive spike in unfilled job openings, far exceeding any pre-pandemic levels.  Labor market tightness, coupled with surging costs for raw materials and energy is worrying many that we may be entering an inflationary cycle. 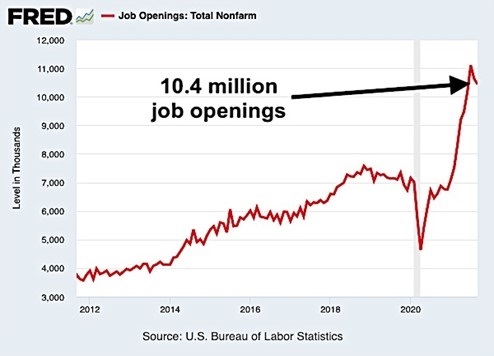 Inflation alone is not necessarily a bad thing.  But what has many worried is the sheer volume of money created by the federal government and delivered to individuals via various stimulus measures that has created a somewhat artificial level of demand, which in turn has pushed up prices.   This, combined with COVID-induced (and China-exacerbated) supply-chain issues has further crimped inventory levels and again helped to bump up prices.  It should be noted that before COVID there was endless talk from the Federal Reserve (Fed) that they wanted to achieve about a 2%, or somewhat higher, inflation rate.  Now they have their wish, with inflation at eye-watering levels.  And with that, the Fed has changed their tone and pulled out the word “transitory” to describe the current spike in inflation.  As many began to examine the causes of our current inflation spike, economists have criticized the Fed’s lack of inflation-fighting measures and point out that inflation may just not be so transitory, or temporary, as the Fed would like us to believe.

Now, the Fed has pivoted to become hawkish in their communications, expressing a desire to control inflation.  In November, the Consumer Price Index (CPI) jumped 6.8% year-over-year, which was the largest monthly gain in almost four decades.  Interestingly, during the Fed Chair Jerome Powell’s testifying before the Senate Banking Committee in late November, Powell reflected on the use of the word “transitory” and said it was “probably a good time to retire that word and try to explain more clearly what we mean.”  He’s basically admitting that that the current inflationary environment is anything but “temporary.” 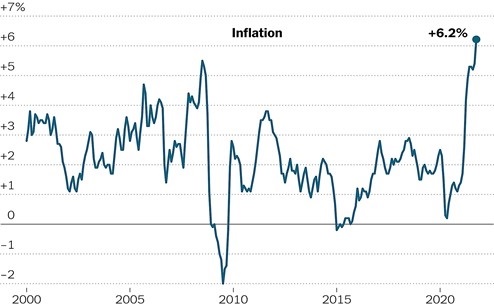 The Fed has already signaled that they will seek to keep inflation under control.  In December, the Fed communicated it would begin to slow its asset purchases (quantitative easing), potentially ending them all together by April 2022 and position itself to raise rates later in 2022.  Just recently, a full release of Fed minutes from their December meeting cited the fact that many members back quicker rate hikes.  Several participants, meanwhile, said they, “viewed labor market conditions as already largely consistent with maximum employment.”   We have to contrast this with Chairman Powell’s earlier comments about the labor market, “In my view we are making rapid progress toward maximum employment.”  Given that we have high inflation, maximum employment, historically high job openings, we don’t see how the Fed cannot raise rates in 2022.  With this, there is heated debate about what higher interest rates will do to the equity markets.

Historically, when the Fed has had to raise rates, it was to prevent the economy from overheating. With this, a strong economy is generally good for equity markets as corporations are reporting strong earnings.  The problem lies in the Fed’s misunderstanding that they are not “masters of the universe” and current high prices for energy and other goods, has other influences than just interest rates.  The energy sector, primarily hydrocarbons, has been impacted by multiple factors such as supply issues that have been simmering due to environmental concerns, production cuts, and a recovering economy that continues to support strong demand. 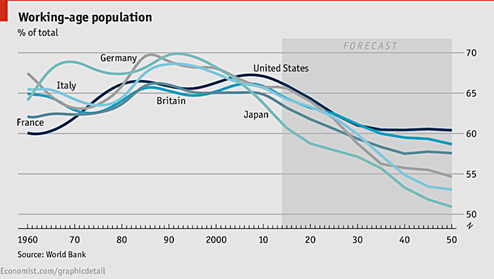 Again, if the Fed lifts rates it doesn’t necessarily mean that the price for food or energy will decline.  Also, among things the Fed can’t control are some labor market demographics.  There is much discussion and scholarly study on aging labor markets in developed economies.  The United States, Europe, Japan, and China are all suffering from demographic constraints among working age populations, which might mean that labor costs will likely continue to stay elevated in these regions, contributing to potentially persistently high inflation.  As the chart above clearly shows, we have a declining workforce in much of the world!  Further, the deflationary effects of China entering the world economy during the period of 1980 to the early 2000s is likely over.  The Fed’s rate policy won’t impact demographics here or in overseas markets.  We will see what effects higher interest rates have on the economy in the coming year.

What do the prospects of higher inflation and a strong employment mean for the investment landscape?  Likely, it means that the “old economy” will perform well, along with their respective publically traded companies that provide these products.  In technical terms, when the forward discounting mechanism increases (interest rates) the price that we are willing to pay for earnings farther in the future is reduced.  This is why we’ve seen a technology-related selloff recently in equity markets, as these cash-flows are typically projected far into the future.  Conversely, what some call “value stocks” have been performing well due to the immediate visibility of their cash-flows.  Clearly some technology related shares are trading at valuations that currently don’t make sense, and never will.  One car company (I’ll give you one guess what it is) that is valued at all other car companies combined is not sustainable or logical by any metric.

We remain confident that good companies trading at reasonable valuations will continue to grow earnings will perform better than bonds.  With interest rates due to increase and the Fed backing away from flooding the market with money, the bond market seems like a bad place to be going forward.  With inflation running hot, keeping money in cash is sure fire way to lose money as your purchasing power is rapidly shrinking.  This backdrop supports staying invested, watchful that the Fed doesn’t become too aggressive and raise rates “too far, too fast,” which in the past has prompted corrections in equity markets.  But we remain confident that’s not the Fed’s intention, as it isn’t good for investors, the economy, or the politicians who watch the Fed very carefully and have been very vocal advocating for a “full recovery” of the economy.

If you'd like to know more about these issues and how they affect your investments, please reach out to us at (562) 433-1400 or send an email to info@ai-mgmt.com.